While reading, “Border Raids and Reivers” by Robert Borland, I came across a term, ‘Book-a-bosom,” which I had never heard before. So I went searching it out and I now share with you what I found. I find it interesting that my researching of the Beattie’s ecclesiastical history, Borland puts the practice of handfasting near the Beattie’s. Some of my Beattie’s may have been un-ordained priests.
“History of England – Tudor History – Border Reivers – The Book-a-Bosom Priest”
by Tom Moss

The English Scottish Borderlands were often laid waste in the times of the Border Reivers (Robbers). The Church, reliant for its temporal welfare on the produce of its parishioners, suffered greatly. As the Border Reiver raids on each side of the English Scottish Border became a way of life, lands and crops were burned and cattle, sheep and insight (household goods) were stolen. This led to a society on two levels. There were those who were strong in arms and numbers who reived on a regular basis and defied any to take back what was stolen. Others of a weaker and more pacific nature were left destitute and hungry; victims of the relentless crime. They had nothing to give to the Church.
Border Reiving Impoverishes the Church:
In a society where care for the soul and a happy afterlife still dominated the lives of many, the mainstay of the community was the Church. It relied for its temporal needs on a portion of the produce of the people who worked, often toiled in the fields, and a percentage of the meat which they nurtured and fattened. Should the community, be it steading or village, suffer at the hands of an opportunistic Border Reiver, and lose cattle, sheep and crop, then the Church takings would be mean indeed.
Churches are Abandoned throughout the English Scottish Border Lands”
In a very short time the community was unable to support the Church and many of the priests were forced to leave and try their luck elsewhere. Churches in the Border country were abandoned for many a year, others dismantled by a people who saw no future use for the House of God. Moreover the Borders became a no-man’s land for the better of the church fraternity; many were scared to minister in such a violent society with the result that un-ordained ‘priests’ entered the country and did little to administer to the spiritual needs of the community.
The parish of Ettleton in Liddesdale was without a minister in the years 1576, 1578, 1579, 1580, 1585, 1586, 1588, and 1589. The parish of Castleton, in the same valley, was vacant during the same years. It was an intolerable situation, rife throughout the English Scottish Border, and not easily remedied. The nurture of the soul became almost non-existent at a time when the fear of God might have helped to improve the ways of a hard and obdurate people.
In 1525 there was a violent reaction from the Border Reivers after they were cursed by the Archbishop of Glasgow, one Gavin Dunbar. In his famous ‘Monition of Cursing’, a rant which runs for over fifteen hundred words, he cursed the reiving families and clans: every part of their bodies from head to foot, and prophesied eternal damnation unless they changed their ways. Time would show that it was the wrong approach to a people who had suffered every type of degradation from loss of life to livelihood. The Armstrongs of Whithaugh in Liddesdale were particularly incensed by the Archbishop’s meddling and proceeded to knock down churches within their vicinity.

The Book-a- Bosom Priest:
Enter the Borders the Book-a-Bosom priest, an itinerant priest, a wandering priest, who would walk the Borderlands at a time when many were afraid to enter its confines, and preach to the people. Even in the lands of the Border Reiver families with the fiercest reputations he was tolerated,if not welcomed. He wandered from village to village administering his spiritual help and guidance at the Market Cross, the focal point of the community, or any wayside cross-road. He carried the ‘Good Book’ within his garments, hence his title.

One particular tradition that is still remembered today is that of ‘Handfasting’. Indeed there are still places named Handfasting Haughs in the Scottish Borders. Should a couple fall in love and wish to be married, then, because there was no priest present in their community, they would promote their relationshipby the joining of hands and wait for the day that the Book-a-Bosom returned to their area to cement their union. It could be more than a year before the priest returned. Should the relationship breakdown in the meanwhile then the one who broke it was responsible for any children that followed the ‘Handfasting’. Should the relationship survive then it would be recognised and sanctified by the church by the Book-a-Bosom priest. 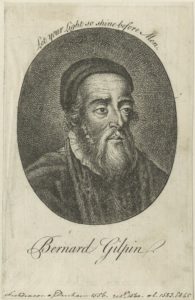 Bernard Gilpin, Apostle of the North:
Gilpin was the complete exponent of the Book-a-Bosom priest. He was a very well-educated man, a fellow of Queen’s College Oxford, and from a well-to-do family in Kentmere in what is now a beautiful little valley in the English Lake District. His home still stands. He was born in 1517. Although brought up in the Roman Catholic faith he wrestled with its doctrines for much of his early life, finding the teachings of the new religion, Protestanism, better able to conform to scripture. In 1552 he was appointed to preach before king Edward V1 at Greenwhich where he attacked the clergy of the day: ‘He was sorry to observe amongst them such shameful negligence and manifest indifference, in discharging the duties of their office’. He was particularly scathing about the practice of ‘pluralities and non-residence’ where certain of the clergy would benefit from church livings besides the one they directly administered or take the proceeds from parishes they had no intention of living in.
He became a favourite in the far-flung parishes of Northumberland, in Tynedale and Redesdale, valleys beset with violence, arson, cattle and sheep stealing, feud and blood-feud. It was brave man who entered the realms of the Border Reivers who lived there. Unabashed, confident that his ministry was both needed and welcomed, he had a willingness to help the ordinary folk with their everyday problems. He did not confine himself to their spiritual needs, though he took great care to guide the folk in the right direction and throw off the torment resulting from the immoral practices of the incumbents of some of the parishes. He had a knack of involving himself in their lives on this earth as well as that of the next and provided many a solution to their material problems. He was tireless in his care, forgiving in his attitude to all; well-respected for his readiness to provide succour and sympathy in a land that held no respect for authority or monarchy, a land exhausted with violence.
Once, when his horses were stolen on his annual pilgrimage to minister to the wild and lawless inhabitants of Tynedale and Redesdale, the thief got wind of whose horses he had stolen. He was terrified on knowing that he had stolen from a man who was not only held in high esteem by the common folk, be they Border Reiver or simple farmer, but also because Gilpin was a man of God whose teachings brought some solace in a war-torn territory. He returned the beasts; surely a singular event in the lives of men who truly believed that property was common to all.
Bernard Gilpin is known now as the ‘Apostle of the North:
The Book-a-Bosom priest provided care and gave hope to a people who were worn down with the daily care of living in a hostile region. He was a welcome sight to many as he made his way into the crowd. He was there to bring comfort and peace if only for a while.