“ THE FOLLOWING DATA QUOTED IS APPROVED BY THE STANDING COUNCIL OF SCOTTISH CHIEFS:

“The Borders family Bell may well descend from a Norman follower of David I who reigned until 1153 and was, by the end of the thirteenth century, well established in Dumfriesshire, Berwickshire and Perthshire.

The name may derive from the French ‘Bel,’ meaning fair or handsome. The Bells participated in the Borders disturbances as one of the riding clans of border reivers. In the thirteenth century Gilbert Le Fitzbel held lands in Dumfries, Sir David Bell was Clerk of the Wardrobe to Robert II. In 1426, William Bell’s lands of Kirkconnel were confirmed by James I under a charter recorded in the register of the great seal.

The Bells, along with other Borders families, became increasingly turbulent throughout the fifteenth and sixteenth centuries. The Crown’s determination to pacify the Borders led in 1517 to Clan Bell receiving royal letters of warning to keep the peace.

The tower of Blackethouse was destroyed in a raid by the English in 1547. After the union of the Crowns in 1603, the family suffered much the same fate as the other border reivers; many emigrated to the new plantation lands in Ulster where the name is among the twenty most numerous in that province. Others settled further afield in Australia and New Zealand.  The descendants of the Lairds of Blackethouse stayed in the realm but moved to the cities where they contributed substantially to learning and in particular medical science.

Andrew Bell, founder of the Madras system of education was born at St. Andrews in 1753, Dr. Joseph Bell, great-grandson of Benjamin Bell of Blacket House, who was himself a distinguished surgeon, is said to have inspired Sir Arthur Conan Doyle to create his great detective, Sherlock Holmes.

General Sir John Bell was a distinguished soldier during the Napoleonic Wars and Gen. James Franklin Bell was Chief of Staff for President Teddy Roosevelt and Medal of Honor recipient. In 1829, Scottish lawyers were introduced to George J. Bell in his “Principals of the Law of Scotland” at the University of Edinburgh. Alexander Graham Bell was a pioneer of the telephone. 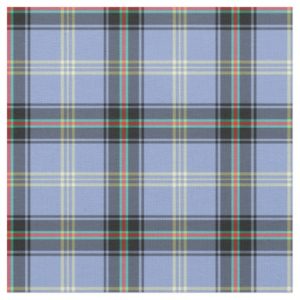 Clan Bell, since 1984, has had a tartan named “Bell of the Borders” and Informally called the “Dress Blue” that is listed by the Scottish Tartans Society and in Tartan for Me! By Dr. Philip D. Smith.  A copy of it has been donated to the Tartan Museum by the David Erwin Bell family. A second tartan that was acquired when the Clan Bell International and Clan Bell Descendants merged. The tartan is named “Bell South.” Both tartans will probably be registered with the Lord Lyon’s office by the new chief once he is selected.  At that time, a Bell of Blackethouse tartan, the tartan of the new chief, will be the first tartan registered.

The spelling of the name seems to have varied with the recorder of the event as it ranged from Bel, Bellis, Belle, Beall, Beal, Beale and Bale to Bell. The Act of 1587 provides proof that Clan Bell was a Border Family. During the 16th century, the appellation Clan began to be used in other than the Highlands.

In the 1600s, Middlebie Parish encompassed approximately 40,000 acres and was populated by 31 major Bell families.  The Albie branch of the Bells, Pennersax Parish, was of considerable importance in the district and quite possibly among the first Bells to hold land, prior to 1300, in what became Middlebie Parish in 1609. From this branch of the clan sprang the holders of Blackethouse, Godsbrig (of Scotsbrig), Auldhall, Satur and Land.  There were also Bells in Gilsland on the English side of the Border that had close ties with their Middlebie cousins.  Modern DNA firmly establishes this fact!

On 6th March 1426, King James I confirmed a Charter granted by the then deceased Archibald, Earl of Douglas, Lord of Galloway and Annandale (who died in 1424), to William Bell the Lordship of Annandale, which had fallen to the Earl through the death of John de Carrutheris without heirs, to be held by the said William Bell and his heirs of the Lord of the lands of Luce in fee (Reg. Mag. Sig., 1424-1513, No. 85.). This was Kirkconnel, possibly the Bell’s first “land by parchment” rather “than by sword”. The property is now owned by the Maxwells.

THE BELL/DOUGLAS RELATIONSHIP  When William, 8th Earl of Douglas, set out for London in 1451 to foment a rebellion against the Scottish Crown, Thomas Bell of Kirkconnel went with him and his name was included in the Letter of Safe Passage. After the murder of William, his brother James, 9th Earl of Douglas, attempted to avenge his death by armed opposition to King James II. Betrayed by almost all his allies, but not the Bells, the 9th Earl lost at Arkinholme on 1 May 1455. The Earl escaped to France, but his possessions went to the victors and the Bell Family, it is said, forfeited Kirkconnel to the Maxwells. The Bells of Blackethouse did not lose their lands. Despite arguments put forth from various persons, Bell is not a sept of Douglas though this argue was at one time put forth by our Col. W. H. Bell.

THE CHIEF OF THE BELLS

History records that all Bells throughout the kingdom acknowledged Bell of Blackethouse for their Chief. This Bell relationship was acknowledged, even by English Bells, especially when a coat of arms was introduced by using the Bell characters in the chevron. William Bell of Blackethouse, who died about 1627/8, was undoubted Chief of the Surname and is believed to have used the principal coat of arms of the Family, viz. Azure, three bells, the crest, a hand holding a dagger, paleways proper, with the motto, “I beir the bel.”  Fourteenth century documents indicate that that motto comes from a practice during games and challenges at that time—the winner of an event or contest was awarded a small bell of silver, pewter or gold and they could claim, “I beir the bel” or in today’s jargon,

The border area where Scotland and England meet was overpopulated in 1500s, and as a result there was a scarcity of land, jobs and food to sustain the ever growing numbers of Borderers. Like other families in this impoverished land in the border area, the Bell Clan began to break up and re-settle elsewhere.

While many a hearty Bell remained in their beloved Border homeland, economic reality forced thousands of other Bells to migrate to diverse locations throughout Scotland and overseas.

During the 17th century, there was a great exodus from the family lands in Dumfriesshire. Many of the Clan crossed to the Ulster Plantation in Northern Ireland, which opened in 1610, but confronted with obstacles there, many    later sailed for the New World.

The Union of the Crowns and the authority of the reformed church virtually ended the Border reiving. Population growth and great poverty provided the impetus for emigration.

Even so, there were still some who were restless under the new conditions, and so the boldest Reivers were brought in on the side of law and order. In 1622, William Bell, called Redcloak, Chief of the Bells, was chosen by John Murray of Lochmaben, with nine others to act as a Border Guard on the West March. In 1624, the Earl of Annandale chose Redcloak to help in the same way. After the devastating War of Independence, residents of the Marches were forced by circumstances to return to primitive living. It was in this environment that our Bell forebears’ character was hammered out on the anvil of survival and tested and were quite well known, especially for their fighting skills.

THE 18TH AND 19TH CENTURIES

Both the 18th and 19th centuries saw a continuing exodus from the Family lands of Dumfriesshire. Many Bells went to foreign lands where they continued to live in concert with the clan ways they practiced in Scotland. Bells were found living in Australis, New Zealand, Germany, Russia, Italy, Australia, New Zealand, Canada, Argentina, Uruguay, Chile, Netherlands and North America.

During the expansion of the Empire, many Bells joined the British armed forces, such as John Bell descended from the Bells of Minsca, who fought at the battle of Waterloo. Others simply moved to the cities to enter the learned professions.

Descendants of the Bells of Blackethouse provided a Surgeon Extraordinary to the Sovereign, two Presidents of the Royal College of Surgeons, various Sheriffs, and men and women of Letters. At the same time In America, cousin David Bell (1810-1888) likewise became a noted and published surgeon in Lexington, Kentucky. Scottish citizens by the name of Bell were, by then, separated into two classes, viz: those who preserved the Clannish form of government and were referred to in political documents as Clan Bell of the West Marche, and, the other class that was found scattered l throughout Scotland and England paying little attention to Clannish organization but successfully indulging in literary, scientific and military pursuits. Numerous direct descendants thrive around the world in 2017.

THE CASTLES OF MAR

The “Castles of Mar,” namely Midmar, Fyvie, Castle Fraser, Cragievar and Crathes Castle, were built by a prominent family of Bell masons, headed by Master Mason George Bell whose “signature” is inscribed right into the walls of the castles dwellings, not castles, but no one refers to them as such now.

IS BELL A SEPT OF MACMILLAN?

Confusing to many is the claim of the MacMillan Clan that Bell is a sept of that Clan. Of much later origin than Clan Bell, and, according to the MacMillans, the Bell Sept of Clan MacMillan possibly originated in Glen Shira at a settlement called Badokennen near the head of Loch Fyne in Argyllshire, far north of the border Bells. It is agreed that some northern Bells supported McMillans in their activities.  NOT all Bells did so. In 2015-2016, via emails, discussions and meetings, Chief George MacMillan agreed with President David Erwin Bell and Sir John L.B. Bell, London, that only a few Bells were septs of McMillan. Both clans fully agree that if you want to pledge fealty to follow and support any clan, you may do so.  The Lord Lyon Court itself does NOT regulate septs or by which clans they can be claimed!

After 1610, when Border clans were “moved” to Ulster, they went peacefully, expecting they could “work to own” their own lands; this proved not to be the case thus causing many to flee to the “new world-land of opportunity.”  Between 1707 and 1729, some 500 Bell families emigrated from Ulster to North America where they struggled, faced the many hardships and greatly flourished in many fields.

This information is given to the Border Reiver Heritage Society, LLC by express permission of Richard Bell of the Clan Bell North America. 12/2018