Clan Dickson is a Lowland Scotland family, affirmed as a principal (chiefless) clan of the East Marches in Monipenny’s Chronicle, Privy Council records and Nisbet’s Heraldry.
“Dickson” is a patronymic surname and tradition states the family originated on the birth of Thomas Dickson, son of Richard “Dick” de Keith, in AD 1247. Thomas’s grandmother was Margaret Douglas, daughter of William, 3rd Lord Douglas. Thomas’s son, also Thomas, was enfeoffed with the Lanarkshire baronies of Hazelside and Symington as reward for his father’s liberation of the Douglas’s Sanquhar Castle in 1295. 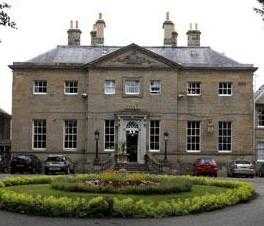 As the Douglasses acquired lands in Berwick and a Keith was made governor of Berwick-on-Tweed, the Dicksons became one of the principal border clans of the East Marches, where they held the baronies of Bughtrig, Belchester, Leitholm and Peel. Newbigging, Westerbinning, Overmains, Ormeston, Hassington, Hedrig, and Stainerigg were also important seats for various branches of the Dickson family. Dicksons served as bailies and provosts of Peebles and Dumfries.
In 1544, the English army recorded the destruction of at least eleven sites belonging to the family. Dickson/Dixon families of the “Debatable Lands” were often allied with, and tenants of, the Armstrongs. By the 17th century, Dicksons, Dixons, Dixsons, Diksons, and other variations were prevalent throughout the border counties of Scotland and England.

The family is subtly memorialized in the old Scottish rhyme:
“Buchtrig and Belchester
Hatchetknows and Darnchester
Leetholm and the Peel;
If ye dinna get a wife in ane of thae places
Ye’ll ne’er do weel.”
All but Hatchetknows were Dickson baronies. 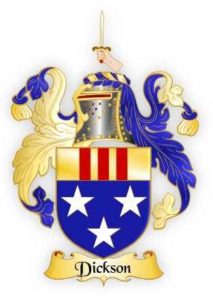 Many thanks to Brent Dickson for his contribution and allowing us to post this information from The Dickson/Dixon International Society.