History of the Graham's

Historically, Graham’s have been recorded living in Scotland and England (origin) but have also migrated to Ireland, Europe and the American colonies.
They currently are regarded as a formal clan, acknowledged by the Court of Lord Lyons. The current Clan Chief is The Most Notable James Duke of Montrose. This family of Scottish nobility has a particular DNA (Y-DAN) that signifies their group. I-M253, from other tested Graham descendants.

The original entry of Graham into the county of Scotland is one or myth and lore. Some have it as, Greame broke the Roman Antonine Wall, stripping Scotland of all Roman legions.

Another notable theory is the entry of William De Graham, a Scandanavian noble that came to Scotland with David I to claim the throne. The second theory seems more credible as noted by historians that Nicholas de Graham attended the signing - Treaty of Brigham- at parliament 1290.

The Graham’s have a noble and violent history of fighting in Scotland and England.

During the Jacobite uprising, James Graham, 3rd Duke of Montrose remained neutral and eventually led the repeal in 1782 of the Dress Act of 1786, removing the law prohibiting highlanders from wearing their tartan.

Buchanan Castle in Stirlingshire is the current seat of the chief of Clan Graham.

Crest: A falcon Proper, beaked and armed, killing a storke 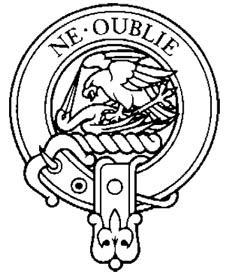 This information was provided to the Border Reiver Heritage Society by Sandee Hall on 16/04/2020 with the expressed permission for the BRHS use on this website.