The history of Scotland, shrouded by the mists of time, indicates that the name "Hall" is a Norman surname. In Latin documents, the surname "Hall" is usually rendered 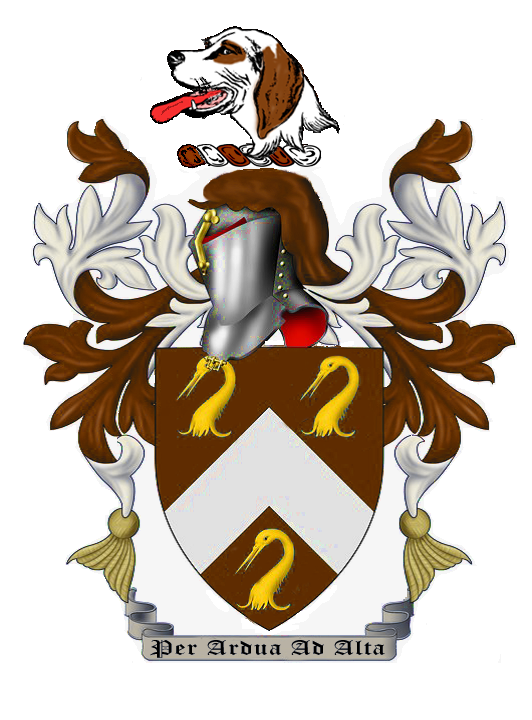 "De Aula". Professional historians used such ancient manuscripts as the Domesday Book (compiled in 1086 by William the Conqueror), the Ragman Rolls, the Wace Poem, the Honor Roll of the Battel Abbey, the curia Regis, Pipe Rolls, the Falaise Roll, tax records, baptismal, family genealogies, and local parish and church records to establish that the first record of the name "Hall" was found in Lincolnshire [England] where they were granted lands after the Norman Conquest in 1066.

The Normans were commonly believed to be of French origin but, more accurately, they were of Viking origin. The Vikings landed in the Orkneys and Northern Scotland about the year 870 AD, under their king Stirgud the Stout. Later, under their Jarl, Thorfinn Rollo, they invaded France about 940 AD. The French king, Charles the Simple, after Duke Rollo, laid siege to Paris, conceded defeat and granted northern France to Rollo. Duke William, who invaded England in 1066, was descended from the first Duke Rollo of Normandy. After distributing the estates of the vanquished Saxons, many nobles were dissatisfied with their lot and they rebelled. Duke William then took an army north and wasted the northern counties. Many Norman nobles fled north and were granted lands over the border in 1070 by King Malcolm Canmore of Scotland.

Upon entering England with the Norman Conquest, the Halls (actually "FITZ WILLIAM”), were settled in Greatford Hall in Lincolnshire. They were directly descended from Wentworth, Earl Fitz William: the younger son of this noble house, Arthur Fitz William, was called "Hall" to distinguish him from his senior brother. Hence, Arthur Hall would be the first on record about the year 1090 AD [not proven]. The line continued in Lincolnshire and intermarried with the Crispins and the Earls of Chester. In Cheshire [England], the Halls were a cadet branch of the Kingsley Halls of that county. By 1340 AD, the name had moved northward at the invitation of Earl David of Huntingdon, later to become King David of Scotland. In Scotland, they were granted lands in Berwickshire, specifically the lands of Glenryg in the barony of Lesmahagow.

The first Hall of Fulbar in Renfrewshire was Thomas de Aula [Latin] for Hall, a surgeon, who, for his faithful service, obtained from King Robert II a grant of land in the tenement of Staneley, barony of Renfrewshire, in 1370 AD [The register of the great seal of Scotland, volume I, pages 407, and 540]. The direct line of Hall of Fulbar ceased circa 1550 AD.

The author and historian, George MacDonald Fraser, describes the activities of the Halls for the next three or four centuries as "A large, widely-spread clan, at one time the most powerful in Redesdale [England], the Halls were well-hated and feared on both sides [of the border].". The Halls were considered to be a clan "to whom no quarter (mercy) should be given.". Fraser listed the notorious Halls as Eddie Hall, "the famous thief" and George of Bordupp, who served with Phillip in the Low Countries (Belgium and Holland). George of Bordupp is mentioned in 1597 by Ralph Mansfield, the Keeper of Redesdale, when he was accused of enlisting help from "a notorious thief and murderer" in his Border patrol. He justified himself by stating that George Hall was receiving recognition for his "martial experience in the Netherlands" and was being allowed to settle in Redesdale.

Author Robert Bain contends that as far back as the sixteenth century Border families were described as clans. The Scottish Parliament in 1587 passed an Act "for the quieting and keeping in obedience of the ... inhabitants of the Borders, Highlands and Isles," that contained a list of "the clans that have Captains, Chiefs and Chieftains ... as well on the Borders as the Highlands," proves Border families were described as clans.

The Halls were one of the sixty (60) major riding families of the Anglo-Scottish border and were involved in reiving along with as other border clans. During one of the "Day of Truce" occasions, a Robert Spragon "fyled" a complaint against two Halls who had rustled 120 sheep. The traditional homes of the Halls were at Redesdale in England; East Teviotdale, and Liddesdale, in Scotland. Some notables in the Scottish East March were: John Hall of Newbigging; George Hall (called Pats Geordie there; Andrew Hall of the Sykes, and Thom Hall in Fowlscheils. Other Halls lived in Aynstrother; Glenryg, in the barony of Lesmahagow; Garvald; Irvide; Glasgow; Sancharmvr, in Preswick; and Perth.

The village of Otterburn, known for the famous battle and border ballad of the same name, contains an old Pele tower that was owned at one time by the Umfravilles. The property passed into the possession of the Hall family.  A Hall by the name of "Mad Jack Ha” had lived there. He was hung at Tyburn for his participation in the Rebellion of 1715.

Feuding was common and was like a cancer on the border. Feuding was not limited to Scots versus English; but Scots would feud with Scots and English with English. It was very hard to establish law and order. Loyalty to the crown, whether it be English or Scottish, came second in many cases to loyalty to the family. It has been said that there were three kingdoms...Scotland, England and the Borders. Fear of starting a feud contributed to chaos in the close of the sixteenth century. Robert Carey, one of the wardens of the border marches, wrote in his memoirs: "The country dare not kill such thieves for fear of feud... If they be but foot loons and men of no esteem...it may pass unavenged, but if he is of a surname, as a Davyson, a Young, a Burne, a Pringle or Hall...then he who killed or took him is sure himself, and all his friends (specially those of his name) is like, dearly to buy it, for they will have his life, of 2 or 3 of his nearest kinsmen, in revenge."

Sir Walter Scott references a "Sym Hall" in his poem "The Lay of the Last Minstrel" in Canto Third.

By 1600 AD, many branches of the Hall family had developed in England and Scotland: Lord Llanover, Sir John Hall, Bishop Hall of Bristol, Bishop Hall of Wearmouth, and at the same time, continuing their interest and seats at Skelton Castle, Yorkshire, Greatford Hall in Lincolnshire, and Gravell House in Middlesex. Notable amongst the family at this time was Hall of Berwickshire.

The surname Hall contributed much to local politics and the affairs of Scotland. During the 12th century, many of these Norman families moved north to Scotland, following Earl David of Huntington who would become King of Scotland. Later, in the 16th and 17th centuries, England and Scotland was ravaged by religious and political conflict. The Monarchy, the Church and Parliament fought for supremacy. The unrest caused many to think of distant lands.

With the union of the crown, King James I, dealt with the borders with a heavy hand. The Borders, between the two countries of Scotland and England, were abolished by renaming them as the "Middle Shires". Many families were forcibly exiled to Ireland or conscripted into military service in the Low Countries. The Halls were no exception, but none of these measures were totally effective as many Borderers found ways to return to their homeland. There was a John Hall of Elsdon, known as Long Parcies Jocke, in Northumberland who was reported to have "returned out of Ireland by what passe we know not, a ryotous liver, ill reputed and much suspected, having nothing to maintain himself with but by keeping an alehouse." This information was gleaned from a survey of "all notorious, lewde, idle, and misbehaved persons in Redesdale.”

In Ireland, settlers became known as the "Adventurers for land in Ireland". In Ireland, the Halls settled in Ulster (Northern Ireland). Hall is a rare name in Connacht, well known in Munster, common in Leinster, and very common in Ulster, especially in counties Antrim and Armagh. It is one of the twenty most numerous names in England, among the fifty most numerous names in Scotland, and listed by the Social Security Administration in 1964; as the twenty-fourth most common surname in the United States.

The attractions of the New World spread like wildfire. Many Halls sailed aboard the fleet of sailing ships known as the "White Sails".  In North America, migrants who could be considered a kinsman of the family name Hall, and its variable spellings, included Christopher Hall (Virginia in 1623); Alexander Hall (Virginia in 1654); Ann Hall (Barbados in 1660); Daniel Hall (Delaware in 1682); David Hall (Maryland in 1684); Edward Hall (Cambridge, Massachusetts in 1630); George Hall (Nevis in 1670); and many, many more. From the port of arrival, many settlers joined the wagon trains westward. During the American War of Independence, some declared their loyalty to the Crown and moved northward into Canada and became known as the "United Empire Loyalists".

The above information was compiled and written by Atlas D. Hall, FSA Scot, the founder and first President of Clan Hall Society.

The Hall Tartan was designed by Atlas D. Hall, FSA Scot, and authenticated by Charles Thompson, author of “So You’re Going to Wear the Kilt”, and a noted authority on tartan research, as well as William Johnston, President of the Tartan Education and Cultural Association (TECA).  The Clan Hall Tartan was entered into the TECA computer database in 1992.  Peter MacDonald, of Crieff, Perthshire, Scotland wove the first swatch of the Clan Hall Tartan.  This swatch was subsequently sent to the Scottish Tartan Society and another Swatch was donated to the Scottish Tartan Society, in North Carolina, for recording and display.

SYMBOLISM OF THE COLOR SCHEME OF THE TARTAN SETT: 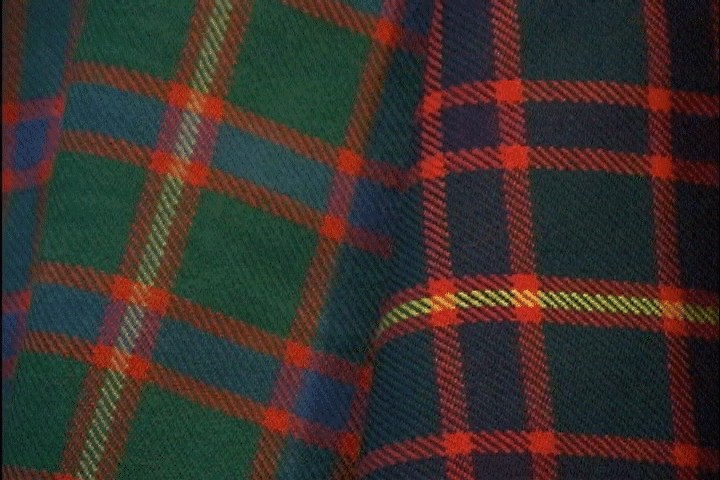 Red:
The color red symbolizes bravery.  The Halls had to be brave men and women to live in the Borders.  Red is also used in the Tartan sett to symbolize our friendship with the Scotts and Kerrs who were our neighbors in the Borders.

Blue:
The color blue symbolizes truth and honesty, as well as symbolizing our friendship with our allies and neighbors, the Elliots.  The four bars of blue represent the four nations, Scotland, England, Ireland, and the United States, where the majority of Clan Hall has lived and continues to reside today.

Green:
The color green symbolizes the hue of the grasses that covered much of the Borders, It also symbolizes our friendship with two other Border Clans, the Johnstones and Armstrongs.

Yellow:
The color yellow symbolizes hope.  In the harsh land of the Borders, where Clan Hall preferred to live, hope was something to be desired.  Yellow also symbolizes the setting sun of distant lands to which Clan Hall dispersed and resides today.

The Halls resided on both sides of the Scottish and English border.  As a result the Halls had allegiances and alliances with various neighboring Clans.  This is symbolized by the structure of our Tartan sett with the color red as a border around the colors of green, blue, and yellow.

Originally  written by David Hall and compiled for publication in the 1999 edition of “The Border Reiver” by then editor, Alex Long.

[The all of the above information was provided to us by John Hall, President - Clan Hall Society and given with the expressed permission for the use only for this heritage page.  3 Sept. 2018]